Consistent terminology is required for organization and clear communication of the variety of airborne and field investigation metadata. These definitions establish ADMG's terminology for the benefit of inventory users. Where possible, definitions are made to agree with those within the communities served by ADMG and some may be similar to those in NASA's Earth Observing System Data and Information System (EOSDIS) Glossary. Note: ADMG definitions may or may not match similar terms used by other entities within or outside NASA.

Many terms are related and represent a hierarchical organizational investigation information structure. These relationships are shown in the diagram below representing the information model used to develop the CASEI metadata contents.

Please provide any feedback to questions about these definitions to ADMG at admg@uah.edu. 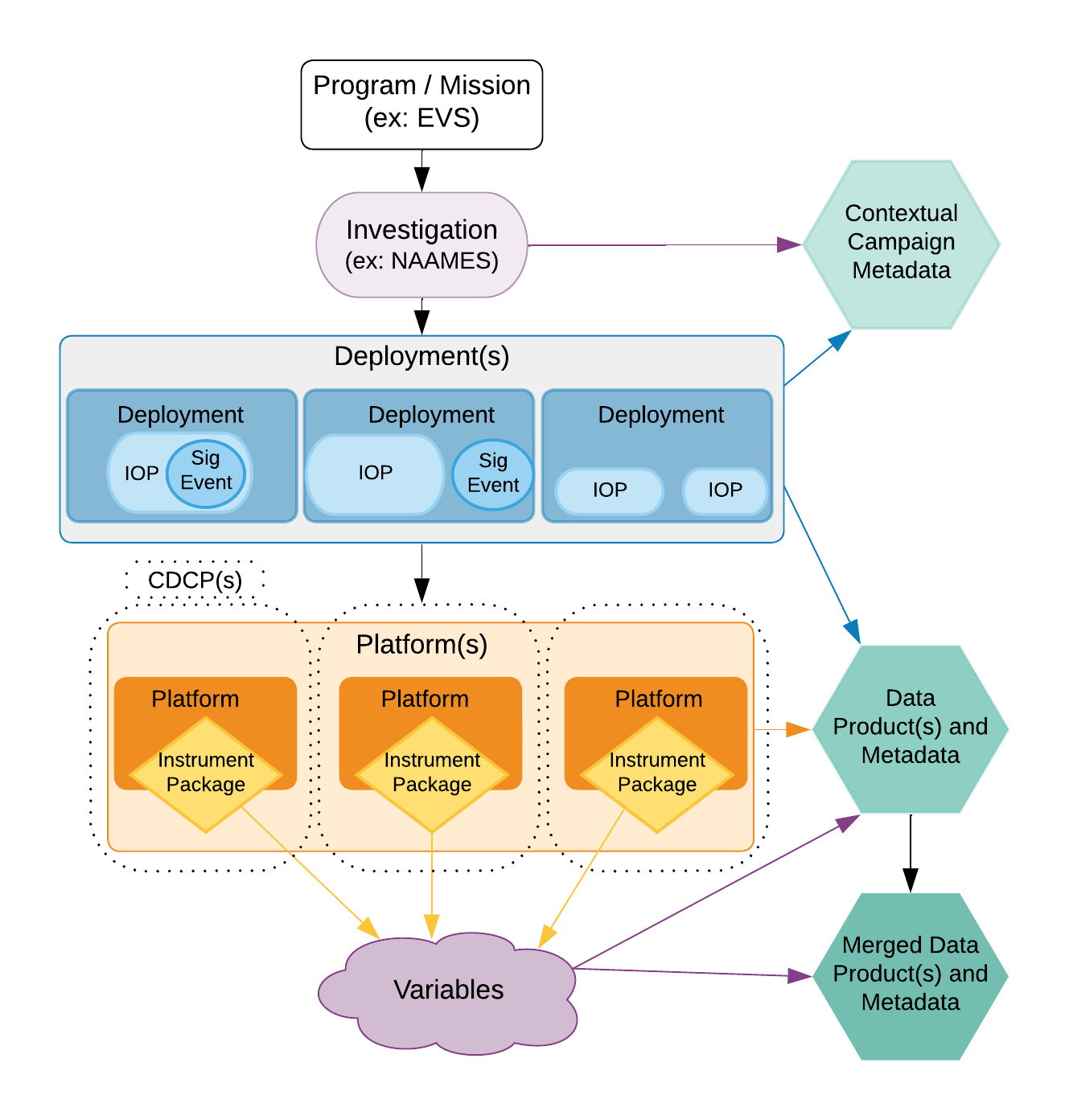 An observational study during which individuals, programs, agencies, or institutions utilize preselected, specific sensors or sets of sensors to acquire targeted observations or samples in a natural, non-laboratory setting in support of common, clearly defined, science or research objectives. Field investigations usually occur over a designated geographical space, period of time, or both. The in-field, active period may stop and start again after a non-field period, meaning a field investigation may contain multiple sessions spread over weeks, months, seasons, or years. Sensors can include in-situ and/or remote sensing instruments operating on airborne, ground-based, and/or other non-satellite platform(s). Satellite-based observations may be included in, but are not collected specifically as part of, a field investigation. ADMG uses the terms “field investigation” and “campaign” interchangeably to represent this level of the effort. While various individuals, science teams, or research groups may also refer to ADMG’s field investigations as airborne investigations, airborne campaigns, field campaigns, campaigns, projects, field missions, deployments, or Intensive Operation Periods (IOPs), within ADMG and CASEI terms such as deployment and IOP have other specific uses that are defined on this page.

An individual time frame within a deployment during which all or a subset of the field investigation’s instrument(s) and/or platform(s) are operating with the goal of observing phenomena in support of the field investigation’s science or research objective(s). IOPs are the primary measurement periods within a single deployment and typically signify a highly focused effort by investigation scientists and staff. A single IOP may contain observations of one or more events or cases. There may be one or more IOPs within a single deployment.

An event observed during a deployment that is notable for the occurrence of a particularly illustrative example of one or more specific phenomena relating to the field investigation science or research objective(s). Significant events may occur within or outside of an IOP.

A structure, item, or surface on which an instrument package can be placed for operation. Platforms can be moving or stationary; permanent or temporary; and airborne, land-/ground-, or water-based. ADMG has identified platform types, guided largely by the Global Change Master Directory (GCMD) Platform keywords’ Category level. Generic examples of platforms include: aircraft, balloons, field sites, vehicles, ships, and buoys. In order to provide a consistent method of organizing field investigation metadata, the following are also considered platforms: satellites, models, and visuals (maps, photographs, etc.). These are included so that data from any of these sources, if specifically pertinent for the field investigation and archived in concert with other field investigation data, are properly accounted for in the CASEI Inventory.

A continuous period of data collection by a platform during which the instrument package is operated. Continuous Data Collection Periods (CDCPs) are based on the activity or operation of a platform, not on individual instruments comprising the instrument package on the platform, as individual operations can vary widely. For airborne platforms, CDCPs are also often colloquially referred to as flights. For water-based platforms, such as ships or vessels, CDCPs are also commonly referred to colloquially as cruises or voyages. CDCPs generally fall within a deployment and likely within the IOP. If a platform, such as an aircraft, is transported to the study location with the science instrumentation turned on, then the transport CDCP may be included in the field investigation data collection even though the data acquisition occurred outside the deployment and IOP range. There may be instances of individual instrument non-operation that result in missing data within a CDCP; this does NOT negate the fact that a single CDCP has occurred. For example,a sensor within an aircraft’s instrument package may not operate for one flight during a deployment. The flight is still considered an individual, complete CDCP.

A logically meaningful group of data with the same basic characteristics (instrument source or class of source, processing level, resolution, etc.) that may have multiple variables. A data product, as the term is used in the ADMG CASEI inventory, represents each item that would be listed in Earthdata Search for a given field investigation. Data products can consist of raw data, higher level/processed data, or may be composed of output from a merging of observations from several similar instruments or from a model. Data products may also be assigned individual data product Digital Object Identifiers (DOIs) when publicly released. Within the context of NASA Earth Science data preservation, a data product includes the data and the associated information (metadata).

A quantity or value observed or diagnosed from measurements made using an instrument or sensor. For example, a radar measures the amount of power and phase received due to returned electromagnetic waves, and through signal processing and retrieval techniques provides several variables, including reflectivity, radial velocity, and spectrum width. As another example, tipping bucket-type rain gauges measure the number of bucket tips that occur with time to provide the variables of rain amount and rain rate. By utilizing the GCMD Science Keywords for the Earth Science Category, the ADMG inventory tracks variables collected by individual instruments or instrument packages.

High level science concepts identified by ADMG as a means to bridge the necessary generality of NASA’s Earth Science Focus Areas and the inherent specificity of the GCMD Science Keywords. These intermediary concepts are intended to facilitate improved communication and contextual use of both the NASA Earth Science Focus Areas and the GCMD Earth Science Keywords, bearing in mind the many-to-many relationships among them and the fundamental interconnectedness of the various processes that comprise the Earth system. There are currently 26 ADMG-identified geophysical concepts which can be assigned as metadata to categorize a field investigation with respect to its purpose, goals, effort, or findings.

ADMG has created decision trees used to classify various items within CASEI in a manner consistent with ADMG definitions. These objective decision tools are intended for use by both ADMG (e.g., when curating historical campaigns in the inventory) and NASA Distributed Active Archive Centers (DAACs) (e.g., when publishing new campaign data collections). By using consistent definitions and decision trees, more harmonious campaign archival and publication will result in clearer communication with users across the NASA Earth Science enterprise.

All of these programs either directly fund airborne and field investigations or fund the instruments and/or aircraft that are flown or used in the field.

Strategy-aligned campaigns are large-scale campaigns that are selected as part of a routinely competed NASA program, such as EVS. They typically last multiple years and have detailed science objectives as proposed through their specific funding mechanism. These campaigns are intended to align with large-scale and long-term strategic goals of NASA.

EVS is a component of the Earth Venture (EV) program within NASA's Earth Science Division (ESD) of the agency's Science Mission Directorate (SMD). Approximately five investigations are selected every four years for EVS funding. The selected investigations are specialized campaigns that use a variety of suborbital assets to gather science data. Investigations may contain airborne as well as ground or water measurements collected in-situ or with remote instruments. EVS-funded investigations have detailed science objectives and are large-scale, multi-year investigations.

Three rounds of funding opportunities have been initiated so far (EVS-1, EVS-2, and EVS-3), and the solicitation for EVS-4 proposals is forthcoming in 2023. Descriptions of the investigations funded in the first three rounds are listed below.

The table below contains the EVS-3 investigations and the assigned NASA DAAC that hosts the archived investigation data.

The table below contains the EVS-2 investigations and the assigned NASA DAAC that hosts the archived investigation data.

The table below contains the EVS-1 investigations and the assigned NASA DAAC that hosts the archived investigation data.

Research & Analysis (R&A) campaigns aim to answer detailed science questions in one or more of the NASA Focus Areas. The purpose of these campaigns is to address specific scientific research objectives for given research topics. R&A campaigns can be either small or large scale depending on the focus of the campaign. They typically last about a year. Funding for these campaigns can come from the NASA R&A program or Research Opportunities in Space and Earth Sciences (ROSES) solicitations.

Calibration/Validation (Cal/Val) campaigns have a narrow focus on instrument and algorithm development and improvement. The main scientific objective of Cal/Val campaigns is enhancing instrument capabilities especially for satellite observations. These types of campaigns are typically smaller in size and last less than one year. Funding for Cal/Val campaigns are generally awarded through NASA Earth Science Project Office (ESPO), or via satellite mission funding.

Multi-Organizational/Regional (Multi-Org) campaigns typically cover a smaller area of study over a short period of time with one or more organizations participating.  To be included in CASEI, NASA must play a significant role and meet the definition of a significant participant. Multi-Org campaigns typically last less than a year and are more regionally-focused. NASA funding for Multi-Org campaigns generally comes from the NASA R&A program. Additional funding for these campaigns can come from other organizations such as NOAA and the National Science Foundation (NSF).