Research Highlights: As organic matter on the landscape decays and dissolves, the compounds and molecules it’s composed of slowly leach into watersheds, which then transport the material to lakes and the coastal ocean. This mixture, which comes in colors from yellow to dark brown, is known as colored dissolved organic matter (or CDOM). As it flows downstream, it’s joined by the CDOM the waterbodies themselves produce from the organisms living within their habitats.

CDOM’s color varies based on the molecules it’s comprised of and they, in turn, have their own ecological roles to play, be it as a source of food, a means of absorbing harmful ultraviolet light, or in carbon sequestration. The ecological functions of CDOM have been difficult to observe at large scales, yet understanding the transport and cycling of these colored molecules at ecosystem scales is critical to improving the scientific community’s understanding of carbon transport, remineralization, and ecosystem processes at both local and global scales.

Among the scientists working to arrive at that better understanding is Dr. Brice Grunert, Assistant Professor in the department of Biological, Geological, and Environmental Sciences at Cleveland State University. It is there that Grunert and his colleagues conduct research that focuses on two components of CDOM biogeochemistry: 1) How changes in CDOM reflect broad shifts in the ecology and biogeochemistry of aquatic systems, including delivery of terrestrial material to the aquatic environment, and regulation of this carbon stock by microbes; and 2) How the transport, production, and breakdown of this globally significant carbon stock can be better tracked by satellite sensors.

“In the Arctic and Lake Superior, we have collected CDOM and selectively exposed it to sunlight and microbes to characterize the 'fingerprints' of the change created by each,” said Grunert. “With this information in hand, we are able to improve our knowledge of carbon cycling within aquatic systems, build better approaches for tracking these specific processes from satellite sensors, and provide transformation rates that can be incorporated into biogeochemical models.”

Grunert’s and his colleague’s research in regional and global systems has also shown that spectral changes in CDOM can indicate broad shifts in ecosystem processes, including nutrient availability and ecosystem productivity.

“We have found that these changes manifest in signals observable from future hyperspectral satellite sensors. This is quite important, as we routinely observe the front end of ecosystem productivity through variability in chlorophyll-a but are often missing what happens to this material after it is produced,” Grunert said. “Satellite estimates of CDOM, alongside chlorophyll-a, provide a window into understanding not just what is being offered at the ecological buffet, but when, where, and which entrees are being consumed.”

To arrive at these findings, Grunert and the other members of his research team have relied on a wide assortment of NASA Earth science data.

“These exciting research frontiers are possible thanks to in situ and satellite observations that are too many to count, produced directly by or through support from NASA,” he said. “We use a variety of in situ and satellite observations, including ocean color imagery offered through NASA’s Ocean Biology Distributed Active Archive Center (OB.DAAC), including the Level 1 and 2 Ocean Color Browser and Landsat 8 and Landsat 9 data from the USGS, field campaigns supported by NASA, and data offered through NASA’s Sea-viewing Wide Field-of-view Sensor (SeaWiFS) Bio-optical Archive and Storage System (SeaBASS) data repository.

Located at NASA’s Goddard Space Flight Center (GSFC) in Greenbelt, Maryland and managed by NASA's Ocean Biology Processing Group (OBPG), the OB.DAAC ingests, processes, archives, and distributes data products in NASA’s Earth Observing System Data and Information System (EOSDIS) collection pertaining to ocean biology. Ocean color data, for instance, are critical inputs in a wide range of ocean research, including studies of the biology and hydrology of coastal zones, changes in the diversity and geographical distribution of coastal marine habitats, biogeochemical fluxes and their influence on Earth's ocean and climate, and the impact of climate and environmental variability on ocean ecosystems and biodiversity. The repository of high-quality in situ oceanographic and atmospheric data offered through SeaBASS is also vital to marine research in that it assists scientists in conducting satellite data product validation, routine algorithm development, and other climate-related inquiries.

With the help of these NASA resources, Grunert and his colleagues have produced several findings furthering their efforts to better understand the processes involved in the movement of carbon in ecosystems at regional and global scales.

For example, in a 2021 paper published in Scientific Reports, Grunert and his fellow researchers investigated the role of microbes and sunlight on the alteration of dissolved organic matter (DOM) along the Yukon River, one of the major Arctic rivers delivering terrestrially-derived dissolved organic carbon to the coastal ocean. DOM is a significant component of the Arctic and global carbon cycle and coastal ocean remineralization, and such investigations are especially pertinent now, as scientists expect perturbations to DOM cycling to occur as a result of Arctic warming.

“The impact of photochemical and microbial degradation, and their interactive effects, on DOM composition and remineralization have been documented in Arctic soils and rivers,” Grunert and his colleagues write. “However, the role of microbes, sunlight, and their interactions on Arctic DOM alteration and remineralization in the coastal ocean has not been considered, particularly during the spring freshet (or thaw) when DOM loads are high, photo-exposure can be quite limited, and residence time within river networks is low.”

After collecting and analyzing DOM samples along a salinity gradient in the Yukon River delta plume and in the coastal ocean during peak river discharge immediately following the spring thaw, and exploring the role of UV exposure, microbial transformations, and their interactive effects on DOM quantity and composition, Grunert and his colleagues found that, along the Yukon River–coastal Bering Sea continuum, there was the potential for rapid transformation of DOM in the coastal ocean from photochemical and microbial alteration, with microbes being responsible for the majority of dissolved organic matter remineralization.

“Our results indicate large microbes play a key role in degradation of terrestrial material in coastal Arctic waters,” write the researchers. “A deeper understanding of how environmental conditions and changing DOM composition impact microbial community structure and function, along with knowledge on specific degradation pathways of photosensitive aromatic compounds, will help address sensitivity of freshet DOM to remineralization in coastal Arctic waters, and residence time within the global carbon cycle.”

Although remotely sensed data were not used in this particular study, its results will help Grunert and his colleagues better understand and interpret long-term changes observed in data acquired by the Moderate Resolution Imaging Spectroradiometer (MODIS) instrument aboard NASA’s Aqua satellite, as well as other investigations of changes within the Yukon River delta using higher-resolution data from the Operational Land Imager (OLI) instrument aboard Landsat 8 and 9 and the Multi-Spectral Instrument (MSI) aboard the ESA (European Space Agency) Sentinel-2A and -2B satellites.

Grunert also used SeaBASS data in an earlier (2018) study published in Global Biogeochemical Cycles that examined the biogeochemical processes affecting the global carbon cycle by monitoring changes in the amount and location of CDOM in the global ocean.

“A large portion of the global carbon cycle is attributed to dissolved material both used by and produced by aquatic microbial organisms,” the research team writes in the paper’s introduction. “Tracking changes to this pool is notoriously difficult but necessary to better constrain biogeochemical processes relevant to the global carbon cycle.”

To accomplish this difficult but necessary work, Grunert and his colleagues analyzed global variability in CDOM absorption spectra from SeaBASS. Their results show that there are unique trends in different ocean regions related to the biology, chemistry, and movement of the water masses in those systems.

These findings are noteworthy given that spectral gradients of CDOM, which provide insights into CDOM composition, processing, food web dynamics, and carbon cycling, have often been viewed as a constant (or semi-constant) parameter in satellite retrievals of CDOM absorption, even though there is significant regional and temporal variability.

Further, in anticipation of future hyperspectral satellite missions, such as NASA’s Plankton, Aerosol, Cloud, ocean Ecosystem (PACE) mission, Grunert’s paper offers some insight into what may be determined about CDOM composition when a next-generation sensor using an expanded range of wavelengths is used in research.

“Viewing these changes [in global amounts of CDOM] with a next-generation satellite sensor with expanded viewing channels may provide tremendous insight into global patterns relevant to the production and degradation of this globally relevant pool of carbon,” said Grunert.

According to Grunert, the ability to use sensors with a wider range of channels will allow him and his colleagues to build algorithms that leverage the astounding amount of data the next generation of hyperspectral sensors like PACE will offer. These data, he said, will lead to a “better understanding of the processes invisible to satellite sensors, such as nutrient cycling in Lake Erie and microbial metabolic processes that manifest as ecosystem-scale signals.”

PACE is scheduled to launch in January 2024 and when its high-volume data stream begins to flow, you can bet NASA’s OB.DAAC will be involved in its collection, processing, calibration, validation, archiving, and distribution to Grunert, his colleagues, and other researchers in the ocean color community working to better understand the processes that drive Earth’s marine ecosystems.

Read about the Research 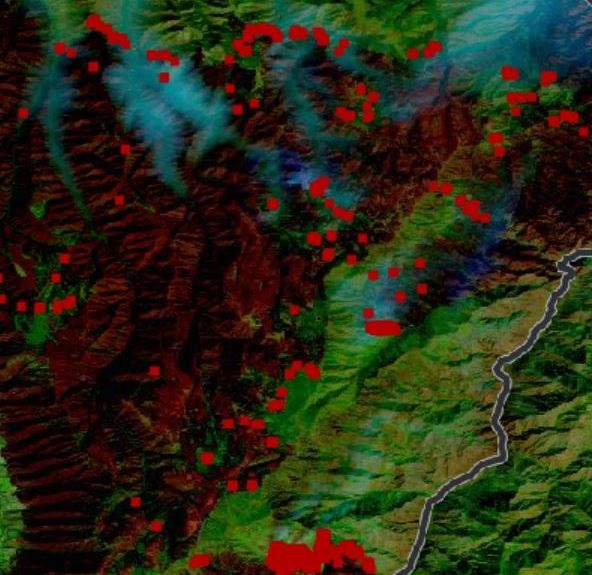