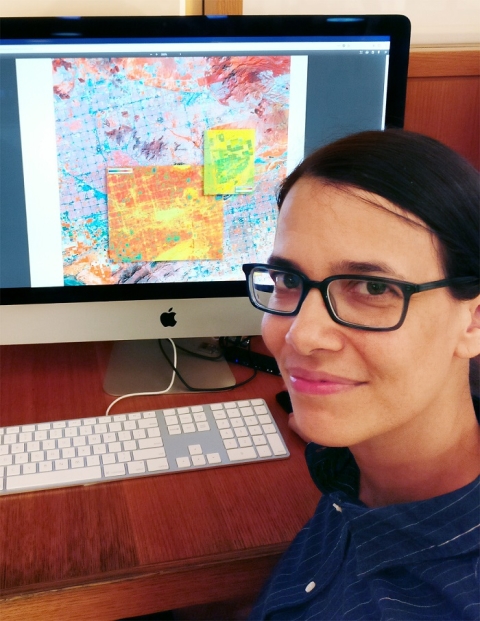 Lela Prashad, CEO and Co-Founder of NiJeL, a data science company focused on environmental and social sustainability; former director (2006-2011) of the 100 Cities Project at Arizona State University’s School of Earth and Space Exploration

Research highlights: The end of June and beginning of July in New York City this past summer were sizzling, with temperatures in Central Park soaring into the 90s four straight days. Meanwhile, the temperature in Islip, NY, 53 miles away on Long Island, reached the 90s only one time during this same period. While Islip’s location closer to the Atlantic Ocean likely helped mitigate the high temperatures experienced in New York City, another factor in Islip’s favor may have been that it lacks the extremely high density of people and pavement found in The Big Apple.

Temperature data measured by instruments aboard Earth observing satellites and at ground level show that urban areas tend to have higher average temperatures than the more rural areas around them. These warmer urban areas are called “urban heat islands.” When temperature data are combined with socioeconomic data (such as census data), population clusters that may be affected by higher urban temperatures are easy to identify.

The ability to combine remotely sensed satellite data with socioeconomic and other demographic data is a powerful tool for exploring the impact humans have on Earth. This combination of satellite and ground-based data also is key component of Lela Prashad’s research into how people live in and experience urban environments.

Much of Prashad’s research centers on exploring the impact of urban heat islands. The increased heat seen in urban areas is caused by numerous factors, including high amounts of concrete and asphalt (which retain and slowly dissipate heat) and higher concentrations of vehicles with internal combustion engines (which produce greenhouse gasses that trap heat). According to the U.S. Environmental Protection Agency, impacts of urban heat islands include:

As Prashad notes, NASA data are the foundation for her work on cities and provide numerous advantages in her studies. Satellite data and imagery allow her to study a complete region at multiple scales and resolutions, provide repeatable coverage at known times, and enable her to acquire data across political boundaries.

An important satellite data source for Prashad is the Advanced Spaceborne Thermal Emission and Reflection Radiometer (ASTER). ASTER is one of five instruments aboard the Terra Earth observing satellite (launched in 1999), and is a partnership between NASA, Japan’s Ministry of Economy, Trade and Industry, the National Institute of Advanced Industrial Science and Technology in Japan, and Japan Space Systems (J-spacesystems). ASTER collects data in 14 different wavelengths (ranging from visible to thermal infrared) that are used to create detailed maps of land surface temperature, emissivity (a measure of the ability of an object to radiate energy), reflectance (a measure of how well a surface is able to reflect light or other radiation striking the surface), and elevation. Prashad supplements ASTER data with data from the Moderate Resolution Imaging Spectroradiometer (MODIS) instrument aboard the Terra and Aqua satellites (primarily land surface temperature and emissivity products) along with imagery from the joint NASA/U.S. Geological Survey (USGS) Landsat series of satellites.

For socioeconomic data, Prashad relies on data products from the Socioeconomic Data and Applications Center (SEDAC). SEDAC serves as an “Information Gateway” between the Earth sciences and social sciences, and is the Earth Observing System Data and Information System (EOSDIS) Distributed Active Archive Center (DAAC) responsible for developing and operating applications supporting the human dimensions of Earth science. For example, SEDAC’s Global Urban Heat Island (UHI) Dataset comprises four maps showing estimates of land surface temperature within urban areas as well as temperature differences between these urban areas and surrounding rural areas, which are defined as a 10 kilometer buffer around the urban area.

Along with her urban heat island research, Prashad also is the former director of an innovative NASA-funded effort called the 100 Cities Project, which used satellite-based remote sensing data to support socioeconomic and biogeographic comparisons of 100 worldwide cities. An underlying goal of the program was to discover the inherent taxonomy of cities through the measurement and classification of many urban sites in order to better inform city planners, managers, and government agencies about sustainable development options. 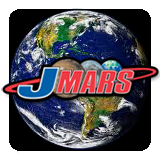 In order to provide the public, decision makers, and researchers with a simple tool to help them view, combine, and analyze NASA Earth observing data and ancillary data sets, Prashad and her colleagues created a toolset called JMARS for Earth (J-Earth). J-Earth was created from the Java Mission-planning and Analysis for Remote Sensing (JMARS) open source geospatial information system (GIS) platform developed by the Mars Space Flight Facility at Arizona State University to provide tools for Mars mission planning and data-analysis. JMARS provides access to more than a terabyte of NASA satellite data, and has basic image and vector processing features to compare, plot, and blend data. Using the JMARS platform, J-Earth provides access to ASTER and MODIS multispectral imaging products along with topography data.

Prashad’s research shows that surface temperature and vegetation data derived from ASTER, MODIS, and Landsat imagery can represent ground conditions accurately enough to enable reliable comparisons of local conditions across different cities. These comparisons, in turn, can be used in studies of the heat-related stresses people in these cities might experience, such as higher temperatures and poor air quality. Further, emissivity and land surface temperature data sensed by instruments aboard Earth observing satellites show the extent to which concrete and asphalt can absorb and retain heat during the day and radiate this heat at night, raising nighttime minimum temperatures. Finally, she has found that while areas of asphalt and concrete can increase the urban heat island effect, patterns of parks, yards, and other green spaces in a city can help reduce the impact of these areas by providing areas of shade and through the cooling effects of evapotranspiration.

By combining remotely-sensed satellite data with socioeconomic data, Prashad and her colleagues are building a better picture of who may be most vulnerable to heat stress in a city. The results of her work and research give local governments, policy makers, and city planners around the world additional tools they can use to measure urban heat island impacts and develop ways to mitigate and reduce the stresses experienced by people living in these urban areas.