Invasion of the Ctenophores

Greek scientists protect the Aegean sea from a predatory invader.

When fisheries biologists Marianna Giannoulaki and Apostolos Siapatis noticed clear, lemon-sized gelatinous blobs floating in their sampling tanks, they were concerned. The researchers were on a cruise of the Aegean Sea, surveying anchovy and sardine populations for a study of commercial fish stocks. But as the study went on, the two researchers saw more of the blobs, jellyfish-like organisms called ctenophores. Giannoulaki said, “It was a little bit frightening: we started to see more and more of them each year, and the spatial distribution was spreading.”

Giannoulaki and Siapatis, both of the Hellenic Centre for Marine Research in Heraklion and Athens, Greece, recognized the blob as a potentially destructive invasive species. In the late 1980s the same invader, a predatory ctenophore called Mnemiopsis leidyi (nee-mee-OP-sis LEEdee-eye), had turned the once fertile fisheries of the Black Sea into an unhealthy gelatinous food web. The ctenophores arrived in the ballast waters of ships, transported from their native environment off the east coasts of North and South America. Once in the Black Sea, the ravenous population quickly increased and spread, feasting on plankton, fish eggs, and fish larvae. Without a natural predator to halt its expansion, the ctenophore’s population grew rapidly, depleting commercial fish stocks in the Black Sea and ravaging the ecosystem, eating up the fish larvae as well as the plankton that the fish feed on. The Black Sea fisheries have only recently started to recover, thanks to the introduction of another ctenophore species that eats Mnemiopsis.

Siapatis first spotted the species in the Aegean Sea in 2001, and by 2004, the ctenophore was on the increase. Giannoulaki said, “The problem with Mnemiopsis is that it’s an invasive species. We know it’s created a lot of problems in the Black Sea. If a big bloom occurs, then we might have a problem in the ecosystem.”

Despite the terrible outcome that Mnemiopsis had in the Black Sea, biologists do not regularly monitor the species. The animal is colorless and small, with the adults usually smaller than twelve centimeters (five inches) in length, and its delicate jelly-like consistency allows it to slide through fishing nets without getting caught. Though they look similar to jellyfish, comb jellies are classified in a different phylum, and unlike true jellyfish, they sting neither prey nor unsuspecting tourists. Jennifer Purcell, a marine scientist at Western Washington University, said, "There isn't widespread information about the distribution of Mnemiopsis. It's sort of this invisible thing, munching away, that nobody really notices."

Giannoulaki and Siapatis decided to keep an eye on the invasive species, using the equipment that they had already set up. Giannoulaki said, "Our survey didn't target Mnemiopsis, but since we had plankton sampling stations every five miles, we thought, 'Why not?' We can go a little further and use the stations to record the presence or absence of the species."

Sampling data showed that the population of the ctenophores increased from 2004 to 2008.

Although the species was on the increase, the researchers did not know if it would reach the high population levels that caused such big problems in the Black Sea. It can be difficult to tell how an invasive species will respond in a new environment. The scientists knew that the ctenophore species was adaptable, a hardy organism that can tolerate a variety of temperatures and salinity. But would Mnemiopsis survive in the Aegean Sea? And if it thrived, would it have the same disastrous effect on the ecosystem as it had in the Black Sea?

The spread of a species

What the researchers really wanted to know was if conditions in the Aegean Sea would allow the comb jelly to multiply and spread, and which regions were most vulnerable. So in addition to ctenophore counts from the plankton sampling stations, they looked at satellite data to learn which environments would best suit the ctenophore. Giannoulaki had done similar work for sardine and anchovy populations. She said, “Sampling data doesn’t tell you about the whole population: it’s just a small piece of information. So we tried to combine this information with the environmental satellite data to get the whole story.”

Giannoulaki used sea surface temperature data from the German Aerospace Agency and from NASA's Moderate Resolution Imaging Spectroradiometer (MODIS) sensor, and photosynthetically active radiation and chlorophyll data from NASA's Ocean Biology Distributed Active Archive Center (OB.DAAC). Together, these data indicate the amount of chlorophyll, which gives an indication of how much food is available in the water.“We combined the satellite data with information about the presence of the species,” Giannoulaki said. “Then we used this information to estimate whether the environmental conditions in an area would be suitable for the species. The aim was to estimate potential areas of the invasive species expansion.”

The researchers then used that model to determine where and when the species was most likely to thrive. Shallow waters, high temperatures, the influx of Black Sea water, which might contain the ctenophore, and high productivity, or food availability, all seemed key for encouraging the growth of ctenophore populations. “Several areas in the western Mediterranean appeared to be good potential habitat for Mnemiopsis,” Giannoulaki said. “We were trying to get the whole story about the spatial distribution of the species. But what you estimate is probabilities—potential habitats. You don’t know if it’s going to be there or not. What you get is whether there are suitable conditions for the species to survive there.”

In their study, published in 2008, Giannoulaki, Siapatis, and their colleagues identified several specific places where the ctenophore was likely to thrive, including parts of the Aegean Sea, the Catalan Sea, and the Adriatic Sea. In 2009, their predictions came true: researchers noticed blooms, or big populations, of the ctenophore off the coasts of Spain and Israel, as well as in the Adriatic. Purcell, who identified the blooms in a recent study, said, “Giannoulaki and Siapatis predicted, in advance of anybody else noticing that the comb jellies were there, that they could be there. I think this study was an excellent example of people using new technologies to creatively look at bigger scale issues.”

Because so few people study Mnemiopsis, researchers do not know exactly how far or how fast the species is spreading. Many reports of its presence come serendipitously from fishers and people who notice it while studying other animals. Purcell said, “I can say that Mnemiopsis was found near shore in Israel, near shore in Italy, and in the Adriatic last year. But there isn’t actually any information on its real distribution—there are only a few people doing research on these gelatinous animals.” There is little interest in monitoring the species unless it has a major effect on people or the ecosystem, and by then the damage is done. Knowing where the ctenophore is likely to spread could mean that countries might impose rules on ships for filtering their ballast waters, to avoid introducing the species in a place it would likely thrive. But with so little data, some researchers worry that it is only a matter of time before it affects ecosystems and fisheries in other areas. For example, the ctenophore also appeared in the Caspian Sea, chomping on plankton and fish larvae as it had in the Black Sea.

Fortunately, unlike the Caspian and Black Seas, some predators of Mnemiopsis already live in the Mediterranean. That gives researchers some hope. Giannoulaki said, “It’s too soon yet to know where it’s going to distribute. You never know, because the species can tolerate a very wide range of temperatures and salinities, but I hope it will not turn out too badly. 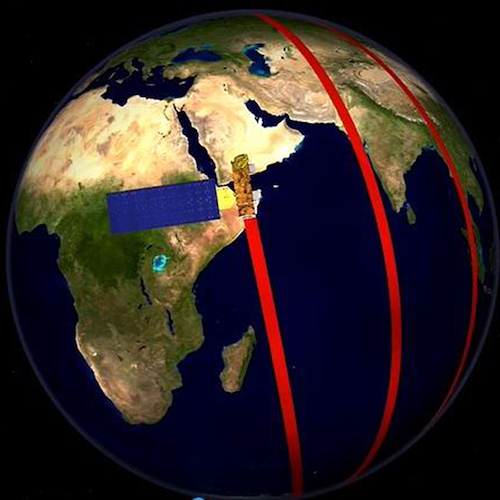