By any measure, the 2020 wildfire season saw extreme fire activity in the western United States. Fueled by bone dry fuels and fanned by strong winds, fires ignited and combined into record-breaking conflagrations that burned more than 10 million acres, destroyed more than 10 thousand structures, and killed more than 35 people. During the response, federal and state agencies relied on a suite of technologies to keep emergency managers, first responders, firefighters, and other stakeholders informed with the latest fire information. Among those technologies was NASA’s Land, Atmosphere Near Real-time Capability for EOS’s (LANCE) Fire Information for Resource Management System (FIRMS), which distributes near real-time active fire data within 3 hours of a satellite observation. FIRMS data was integrated into NASA's Disasters Mapping Portal and used to generate maps of fire activity, position, perimeter, smoke direction, and other information critical to the fire response.

A screenshot of the FIRMS US/Canada fire map highlighting the Creek Fire, which started on September 4, 2020 near Shaver Lake, California, as seen in the U.S. large incident locations layer (sourced from the Integrated Reporting of Wildland Fire and Information (IRWIN) and the USA fire perimeter layer (from the National Incident Feature Service (NIFS)).

FIRMS US/Canada is the result of an agreement between the GTAC and NASA to modernize and optimize the USDA Forest Service’s distribution of active fire information by leveraging LANCE’s web-based active fire mapping tools and capabilities for disseminating data, products, and services. This effort involved the migration of the Forest Service’s upstream satellite data processing applications to a computing platform at NASA's Goddard Space Flight Center, and the development of a new instance of FIRMS focused on the U.S. and Canada tailored to the Forest Service and wildland fire community’s active fire mapping needs.

The significance of this NASA-Forest Service partnership goes beyond the creation of FIRMS US/Canada. It establishes a single, authoritative source of near real-time fire mapping, visualization, and geospatial data products and information for the United States and Canada jointly supported and enabled by both agencies. This enhanced cooperation will boost the availability of selected contextual geospatial data to increase the utility of near real-time fire geospatial data products, as well as increase opportunities, under the auspices of LANCE, to evaluate and integrate additional sources of NASA, NOAA and international space agency satellite data of value to the user community.

"NASA values our ongoing partnership with the Forest Service that is improving our ability to use near real-time satellite data to respond to forest fires,” said Robert Wolfe, chief of the Terrestrial Information Systems Laboratory at Goddard. “This joint effort to modernize GTAC’s Active Fire Mapping functions by leveraging NASA’s FIRMS both enhances our global FIRMS framework and focuses it on the needs of US and Canadian fire fighters.”

“With our colleagues at Goddard, we are excited to complete the first phase of the latest effort to ensure state-of-the-art active wildfire mapping,” Oakeson said. “The new version of FIRMS US/Canada will allow us to continue to provide near real-time capabilities for the location, extent, and intensity of wildfire activity, which is crucial to strategic wildfire planning and response,” she added.

Following the launch of FIRMS US/Canada, the Forest Service has announced that it will phase out its legacy fire mapping initiative, the Active Fire Mapping Program, in about a year.

“The period of overlap will provide a gradual sunset for the legacy platform,” said Brad Quayle, a remote sensing and GIS specialist who leads active fire mapping for GTAC. “Wildfire agencies, decision support applications, and the public are ensured continual access to the legacy platform as they transition to FIRMS US/Canada.” 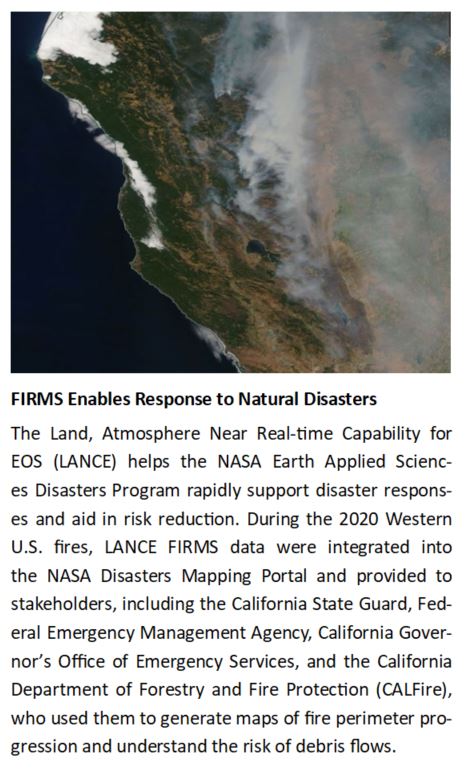 During that time, LANCE and the Forest Service will implement additional enhancements and add new functionality to FIRMS US/Canada as necessary.

FIRMS, the foundational application on which FIRMS US/Canada is based, was developed by researchers at the University of Maryland with funds from NASA’s Applied Sciences Program and the United Nations Food and Agriculture Organization. It was transferred to the LANCE system in 2012.

In addition to viewing active fires via the Fire Map application, FIRMS users can download active fire data for the last 24 hours, 48 hours, or week in shapefile, KML, WMS, or text file formats. (Data older than seven days can be obtained using the FIRMS Archive Download Tool.) Users may also sign up to receive email Fire Alerts notifying them of fires detected in specific areas of interest. Through this free service, alerts can be received in near real-time or as daily or weekly summaries. Every week approximately 15,000 FIRMS alerts (including daily alerts, Rapid Alerts, and weekly alerts) are sent to users in more than 160 countries, according to the FIRMS team.

To learn more about FIRMS and its data sources, or to see active fire maps, visit the FIRMS website.

To learn more about LANCE and how the data and imagery it provides is used to monitor a wide variety of natural and man-made phenomena, visit the LANCE website.