Who Uses NASA Earth Science Data? Dr. Chelle Gentemann, to study the effects of sea surface temperature on the ocean and atmosphere. 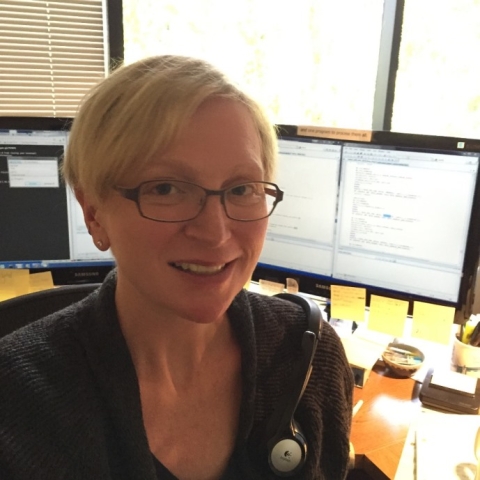 Current research focus: From space, the predominant color of Earth is blue. In fact, one of the most famous NASA images of our planet, a full-disk image taken by Apollo 17 astronauts in 1972, is called the “Blue Marble.” This blue is thanks, in part, to the high amount of water surrounding our world that absorbs and scatters light passing through it. According to the U.S. Geological Survey (USGS), water covers 71% of Earth’s surface, with 96.5% of this water held in the oceans. This vast amount of open ocean water has a correspondingly large impact on global weather, climate, and circulation, primarily through the exchange of heat between the ocean and the atmosphere. Gentemann’s sea surface temperature (SST) research is helping to fill in the gaps in our understanding of how SST affects Earth.

With such a wide area over which to collect data, SSTs can be studied most efficiently using data collected by instruments aboard satellites, such as the Moderate Resolution Imaging Spectroradiometer (MODIS) instrument aboard the Aqua Earth observing satellite. As a member of the Group for High Resolution Sea Surface Temperature (GHRSST) science team, Gentemann is helping to improve satellite SST data and analysis. Her work as part of the the Multi-sensor Improved SST (MISST) project team focuses on improving the quality of satellite-generated SSTs, producing multi-sensor SST data using a blend of U.S. and international data sets, and broadening the use of SST products within targeted coastal applications and the Integrated Ocean Observing System (IOOS).

Improvements in SST data also will lead to improvements in models designed to simulate Earth processes. One NASA model is the Goddard Earth Observing System Model, Version 5 (GEOS-5), which is a collection of models designed to simulate Earth climate variability on a wide range of time scales. Gentemann and her colleagues are developing and testing an advanced GEOS-5 model interface to improve representations of SST along with representations of the ocean and atmospheric surface boundary layers. This, in turn, will enable the creation of better models of the Earth’s atmosphere and help produce more accurate weather and climate predictions.

Gentemann also is studying cold wakes generated by tropical cyclones. As these strong storms move across the ocean, colder SSTs are pulled in behind the storms due to the storm’s rotation. Since warm SSTs are what power tropical cyclones, colder SSTs can rob the storm of the energy it needs to survive. Finally, Gentemann is working on a project examining the causes of the abnormally high SSTs in the northeast Pacific Ocean and the relationship between this anomaly (which also has been called the “Warm Blob”) and the persistence of blocking high pressure contributing to drought conditions in California.

Research findings: Gentemann found that the primary sources of uncertainty in satellite SST retrievals are due to errors in spacecraft navigation, sensor calibration, sensor noise, retrieval algorithms, and incomplete identification of corrupted retrievals. Looking at retrieval accuracies of microwave (MW) SSTs acquired by the Advanced Microwave Scanning Radiometer-Earth Observing System (AMSR-E) and infrared (IR) SSTs acquired by MODIS, she identified errors in both the MW and IR SST data sets, including significant cloud contamination of nighttime MODIS retrievals at SSTs less than 10°C (50˚F). Her research also revealed significant differences between SST products in coastal and open ocean areas. Differences of more than 2°C (about 1.1˚F) are often observed at high latitudes partly due to the different treatment of the sea-ice transition zone by the algorithms used to generate SST data products.

In another project, Gentemann and her colleagues investigated Category 4 Hurricane Kenneth, which experienced unpredicted rapid weakening when it stalled over a cold core eddy on 19-20 September 2005, 2,800 km SE of Hawaii. Although the storm’s weakening was attributed to wind shear, research by Gentemann and her colleagues indicates that the slow movement of the storm and consequent intense SST cooling were the main causes of the storm’s rapid weakening.

Finally, in her investigation of the Pacific Ocean warm SST anomaly, Gentemann and her colleagues found that the 2013-2015 warm anomaly was unprecedented. Both a long-term in situ SST time series and a more recent NASA satellite time series show the warming in the eastern Pacific and along the West Coast is the largest in the historical record. The satellite data, which have a higher temporal and spatial resolution, show an even larger anomaly than the in situ-based time series.